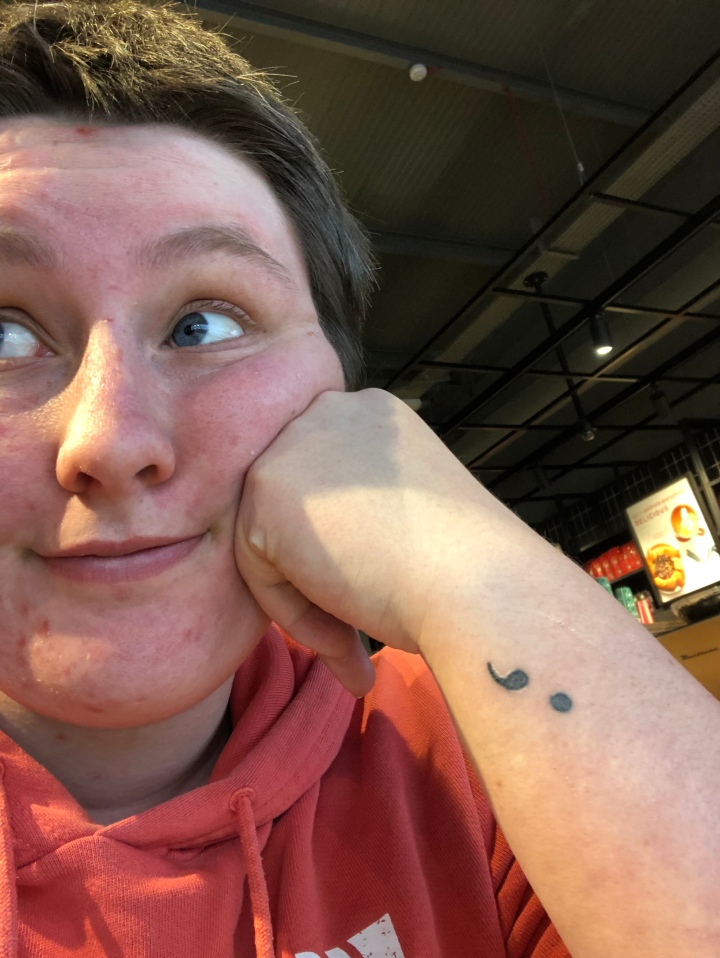 Hey! My name is Beth and I’m 20 years from England! I Blog about everything and I have a little condition called ‘Alopecia Areata” which means I suffer from significant hair loss.

This is my beautiful:

It started around February 2017, I was super stressed at work to the point where I came home crying my eyes out a good two or three times a week. Work was the last place I wanted to be despite just months earlier it being my escape from the rest of the world and my time to relax and put my mind elsewhere. Things had changed and I no longer felt comfortable let alone happy to be there.

I was getting ready to go on a night out and my mum helping with my hair, says “Bethanie, why’s there a bald patch in your hair?” I thought she was joking with me so my response was “Don’t lie, mum” well, turns out she wasn’t and on closer inspection I had three or four little bald patches on my head. I felt self-conscious all night despite all the reassurance my friends gave. I just couldn’t stop touching the places where I had no hair. It was weird.

months on, I went to the doctors and was told stress was the cause and there was nothing I could do. I still had bald patches but you couldn’t really see them all that much through my hair, not that, that made me any less self-conscious. I lived in my Buff bobble hat, and was constantly asked “Aren’t you warm in that hat?” and “You cold?” to which my reply was “ahah, yeaaah, haha” followed by an awkward smile and a swift exit. I left my job in July, passed my driving test and was offered full-time work elsewhere on my return from Poland, things started looking up at last!

I spent two weeks in Poland and a week in the lakes and absolutely loved it, those three weeks away were what I needed and I’d been more like my usual happy self instead of mopey Beth who always wore a hat and looked absolutely knackered all the time. Greatest of all, my hair started to grow back!

Summer was over, September and October came and my hair continued to grow. Life was good again, until suddenly it wasn’t. I’d noticed a worrying amount of hair in the bottom of the drain after I’d showered and asked my mum to check my head and sure enough my suspicions were confirmed, it had come back. Little did I know what I’d had before was nothing in comparison to what was to come. In a matter of weeks, I lost almost all of my hair, the hat was back on and my confidence was gone. Although stress caused it the first time, this time there wasn’t an explanation, and not knowing was frustrating.

My mood declined rapidly, I wasn’t fun to be around, I became withdrawn and anti-social, I stopped going to meetings because I couldn’t be bothered, my hat was a constant feature in my appearance. No one really knew that I had Alopecia, only those closest to me. Most of my cousins, uncle’s and aunties didn’t know either until I wore my hat at the Christmas family get together, and was faced with a round of repeated questions. Christmas day came with tears, questions of ‘Why me?’ and wishing that I still had my granddad around because he always made things better.

The worst things was how disheartening it was to brush my hair and see drags and drags of hair coming out, sometimes I’d go a week without brushing my hair because I didn’t want to pull my hair out and well, my appearance didn’t matter did it? I had a hat on ALL the time.

In February I went to Bramhope for the weekend on a reunion camp I’d arranged for a group of people I’d been to japan with in 2015, and the only person who saw me without my hat on was one of my best friends, Ellie and my Jamboree leader Elaine when she came in the room whilst I was getting changed. I even slept in my hat on the Friday night to avoid having to tell Elaine about it because honestly, I’d probably cry.

By March, I practically had no hair, I was still fairly withdrawn and pretty down in the dumps. I’d been to the doctors twice in the past couple of months, the first time I was told to commit to a thorough hair washing routine and warned away from ever brushing my hair when it was wet. I personally thought it was rubbish advice since I basically had no hair but I did as I was told anyway. The second visit was more successful, with my dad accompanying me – he brought up the fact that it was affecting me mentally as well as physically and with that I was referred to a dermatology specialist and given a scalp application to put on to hydrate my scalp and promote hair growth, again sadly this didn’t work.

With a bit of confusion, I eventually got an appointment to see a dermatology specialist on the 3rd of may! It’s probably worth mentioning at this point that I also have eczema which falls under the dermatology category as well so hopefully I’d get assessed for that too!

I bought a couple of wigs which in the end I only wore once and didn’t get along with so after that, I made the choice to shave my head. Let me tell you, it was strange. The hairdresser said to me “Well, at least you’re laughing and not crying!” my reply was “I’ve got to laugh otherwise I will cry!” and that was the truth. Even though I didn’t have much hair, getting rid of what I did have, had been both scary and liberating.

I soon got over it and became more confident, starting to go out more and generally be more open about it. However, I do get a lot of comments and questions, the most common of which is “Are you recovering from cancer” which I can’t answer in any way other than honestly. It’s always an awkward conversation. One lady said “That’s a bit drastic isn’t it? Is it intentional?” This one took me by surprise. She walked out of the shop after I said it wasn’t on purpose. I really wish I’d said in my most sarcastic tone “Actually, yes, it is intentional. I’ve gone way off the rails and decided to show this by shaving my head. But a shaved head wasn’t good enough, no, no, I thought if I made it patchy, it would give you a real insight in to my severe downward spiral.” I wonder how she’d have responded.

I was prescribed various creams and applications to use by the dermatology specialist and ordered to go for a biopsy to confirm my condition was only AA and not something more sinister. My biopsy was a barrel of laughs because after having two needles in two parts of my head and then being subject to the doings of a tool similar to an apple corer, my head didn’t want to stop bleeding. Apparently, I lost a lot of blood, not that I knew, I can’t see my head and it was numb so I couldn’t feel it either. Afterwards, I was sent on my way with a couple of stitches and some oversized plasters. My hair is currently growing back, and getting super long!

Now, I’d like to think I’m back to my usual self but I can’t really be the judge of that because I thought I was coping just fine when it happened again in November and only on reflection do I realise that I really wasn’t. 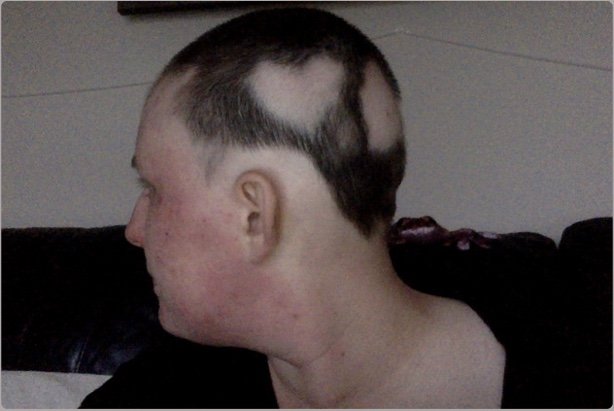 A lot of people have questions about my hair or lack of, which is absolutely fine, just be polite.

For those who wonder, the love heart in my head is the way my hair is growing back!

I’ve felt down about losing my hair and it’s been so hard dealing with it. But I did and I’m fine now, I think that’s what’s most important!

I hope you leave this blog post and ask someone you’ve not heard from in a while, how they are, because you might just be the one that gets them through the rest of their day. Love the people around you, and be kind, because kindness costs nothing and a smile is contagious!

While I Felt beyond ugly with no hair, I think this is my beautiful and I hope you enjoyed reading about it!

Where to find Beth: